I live in a place where the city meets the sea, where the rough and weathered surfaces of concrete and limestone confuse themselves while Bluetooth speakers battle over the sound of the liquid waves crashing on the solid ground. I arrived here suddenly, diving at the right moment. Rather than avoiding the approaching wave of uncertainty, I let it carry me here. Perhaps uncertainty heightens the desire for the horizon, the desire for vast, liquid bodies that have nor beginning nor end. That oceanic feeling.

I am from a place where the city meets the sea, where blue blobs of chaos– man o’ wars[1]– are scattered across the beach forcing us to make winding trails around their slimy bodies. Man o’ wars are like balls of affect, balls that affect– a simple graze, a deadly sting. And yet, they are colonial organisms that cannot survive independently, thus functioning from a symbiotic relationship between various polyps. These creatures can be considered as ‘webs of physical intimacy and fluid exchange’ in a ‘hypersea’ of affect[2]. In a time where proximity to others is recognised as dangerous, we are confronted with our own need for intimacy and human interaction. Like man-o-wars, our dangerous, liquid bodies must rely on each other in times of uncertainty, somehow.

“Something Blue” was born from the “quivering tension of the in-between” to consider the liquid mesh that entangles us [3]. Bringing together works by French artists Océane Bruel and Maxime Fragnon, the exhibition observes the in between-ness of bodies, spaces, emotions, materials, considering the something that happens in liminal spaces.

If Maxime Fragnon considers his works as landscapes, Océane Bruel’s works are bodies that penetrate and cohabit within the space. Each of these elements – landscapes, bodies – reveal a certain fragility and are constantly subject to transformations caused by both natural and human made forces. It is from various periods of latency that each of their works are born, relying on this in-between, liquid state. Océane Bruel and Maxime Fragnon are porous: they absorb liquid life[4] in an ebb and flow cycle, and through various techniques, materials and space transform. Their practices are composed of a corpus of independent forms that change over time. Elements from various works circulate, combine and intervene to form new entities.

Carrier bags[5] of things that were (Océane Bruel, Untitled (You & Me), 2019); scattered ceramics–like shells–containing organic and fragile universes (Maxime Fragnon); reflections of surface tensions (Océane Bruel, Untitled (mirror), 2020), and objects weathered by time (Maxime Fragnon, various works) are assembled in “Something Blue” to celebrate the undefinable ‘something’.

“The material self cannot be disentangled form networks that are simultaneously economic, political, cultural, scientific, and substantial…what was once the ostensible bound human subject finds herself in a swirling landscape of uncertainty.”[6] If water is an archive of matter and feeling, the works present reveal this swirling landscape in which everything is connected yet uncertain– today’s diluted, liquid modern world and that oceanic feeling of eternity that one, perhaps, may be feeling today. 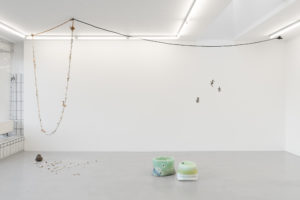